The retail JPSZone Private Server is based in the Chronicle Saga 2: The Chaotic Throne. Throne II: High Five release (CT2.6). Welcome to Retail gameplay again! Feel the game again as it was in its origins!
https://jpszone.com/forum/

by Anny
Hi. Maybe i dont know much about High Five chronicle but still i ll post the situation. Last weekend on Sunday 13 th someone registerd to attack Gludio did it, and failed. All the castles had the same date for the sieges i thought, but today i verified the new siege dates and with surprise I see that this weekend on Sunday 20th there are also sieges, except for Gludio, that has no owner, and the date has been postponed for a week later. The retail siege time is that usually? I thought it was every 15 days, and my clan mate too. Can you clarify that for us please ? Regards. 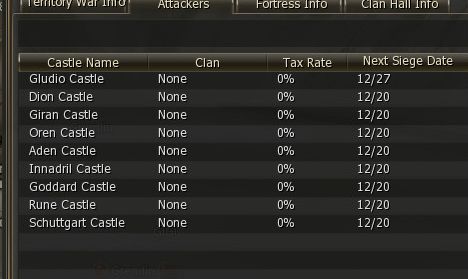 by Sacrifice
Today I take a look at this matter.

by Sacrifice
There is no programmed behavior so that the siege of the castle is repeated after 7 days. If a user tries to siege a castle and does not succeed, the siege will be scheduled for another 15 days, it is not 7 days.

by Sacrifice
I have investigated a little and I have discovered that there is a small offset that increases with the passage of weeks (milliseconds).

On the other hand, there is a class that avoids having many sieges at the same time and avoids conflicts.

It also happens that once you sign up for a siege and change the clan leader before the data settles, there is, say, a penalty for trying to cheat, which I interpret to be unintentional.

Beyond what I am explaining and with the starting data that I have, I cannot give a more concise answer. Over time we will see the operation of the improvements that I introduced.